As Essential Medical Providers, we remain open during the pandemic. Click here to see how we are protecting our patients and staff.
Press enter to begin your search

What’s the Problem With Prolonged Sitting?

If you’re like me you’ve been told since a young age to sit up straight and stop slouching. But it was not until the start of my professional career that I truly began to understand the importance of proper posture and the difficulty of fixing it once it?s become problematic. Specifically, the problem with prolonged sitting is that it often leads to muscle imbalances in the neck, shoulders, lower back and hips. With prolonged sitting muscles are not only placed in shortened positions, but are also neurologically facilitated and programed to become increasingly short and tight. Over time these muscle imbalances can cause tension headaches, low back pains, disc herniations and even an increased chance for arthritis.

What’s more interesting is that these postural muscle imbalances are so common that they have been detailed and classified clinically. These concepts initially put forward by Dr. Vladimir Janda, a Czech physiotherapist, are described below.

In Upper Crossed Syndrome there is an over activation of chest muscles as well as some of the upper neck muscles creating the appearance of chin jutting and a humped back. This is illustrated well in the photo below. In more concrete terms, this pattern is characterized by tightness in the pectoralis muscles anteriorly as well as the sub-occipital, upper trapezius, and levator scapulae muscles posteriorly. Not coincidentally, this pattern is the same thing that you see when you look over at a colleague who’s been hunched over the computer all day. In a thesis recently written by Matthias Treff, a Masters student in Engineering at Virginia Polytechnic, it was demonstrated that there are reductions in cervical spine range of motion as well as strength in postures associated with UCS. 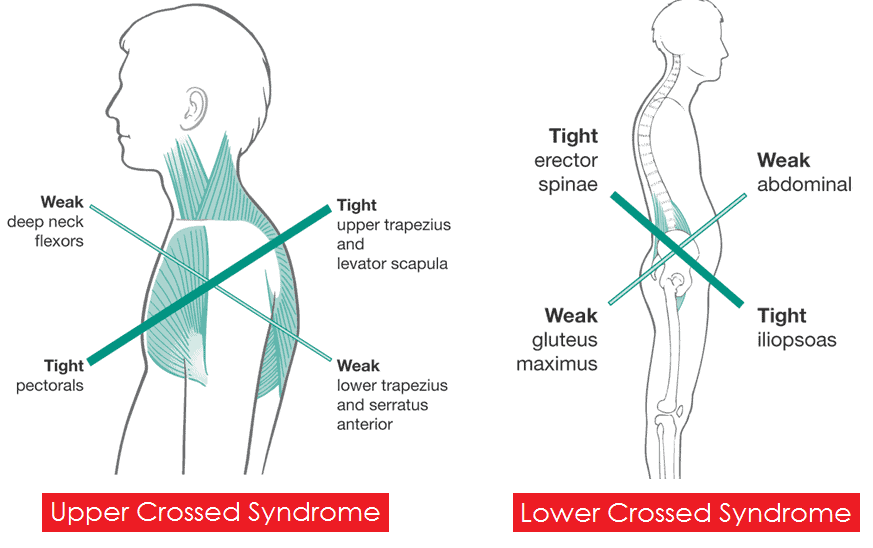 Similarly, in Lower Crossed Syndrome, there is a shortening of the hip flexors in the front of the body and of the low back extensor muscles. Simultaneously there is a weakness in the supportive abdominal muscles and hip extensor muscles. With this pattern you again may see increased thoracic kyphosis, rigidity, decreased stability of the lumbar spine, functionally limited hip extension and a decreased ability to stabilize and support the lumbar spine.

With all of these muscle imbalances the body loses the ability to keep it’s joint’s centered as it moves through a given motion. Depending on the region, this can cause arthritic changes to the neck and back, it can wear through soft tissue structures like spinal discs, rotator cuff muscles, or lead to an increased incidence of tension headaches originating from the sub occipital muscles.

Even with demanding jobs that necessitate prolonged sitting there are still things that we can do to guard against the onset of UCS and LCS. The simplest recommendation is that you stand up at least once an hour and move around. Not only will this get your blood flowing but it will help to combat against creep– the gradual onset of muscle contracture with prolonged sitting. Following good ergonomics can be another important step as well as taking micro-breaks. One of the best known micro-breaks was widely popularized by Dr. Stuart McGill at Waterloo University. The brief exercise involves standing up, stretching the arms up over the head and briefly reaching one arm, and then the other arm, toward the ceiling. Finally, McGill troubleshoots ergonomics errors and clarifies that ?an ergonomic chair is one that facilitates easy posture changes over a variety of joint angles.? For more information on evidenced based ergonomics and micro breaks follow this link to McGill?s original article. (http://www.humankinetics.com/excerpts/excerpts/strategies-to-make-seated-work-less-demanding-on-the-back)

Finally, the most important gem I can leave you with is this: If you follow all of these changes and are still in pain or suspect that you?re developing UCS or LCS seek the advice of a medical professional. There is no sense in allowing a treatable condition to progress to the point where it has left you with permanent changes. If you?re looking for more information on the crossed syndromes or muscle imbalances, check out the following link: http://www.jandacrossedsyndromes.com/about/jandas-crossed-syndromes/ .