When we were high school juniors, Dave was at the home of another friend named Jackie one evening. Jackie was showing Dave some of his hunting rifles that Dave may have had interest in buying. Some other kids from a neighboring town came by to see Jackie because they thought he had taken something from one their cars and so they had come to confront him. A fight broke out and in the fight both of my friends were hurt but Dave was hit over the head with one of the guns.

One of the first responders who was in the back of the ambulance with Dave and Jackie that evening said that he thought Jackie?s injuries were worse. Dave, in fact, was sitting and talking to him while Jackie lay on the stretcher.

Over the next few days, Jackie would get better, and Dave?s brain would begin to swell. Unable to control the swelling, Dave De Sieno succumbed to his injuries.

As a group of young people who grew up together in a small town, we had experienced our first tragedy. These weren?t bad kids, just kids, and a situation that unfortunately got beyond them being just kids.

Over the years I would have many more opportunities to experience similar situations. As a Respiratory Therapist, I would accompany many from the Emergency Department to CT scan including a 12 month old boy who I had to manually ventilate through the scan when we were unable to keep him safely on the ventilator. That little boy was bounced off the ceiling by his uncle who was high on crack at the time.

And outside of work as well, other people I knew or knew of, and even family. We will never be able to stop injuries resulting from acts of violence. And there will always be an element of risk in everything our kids do, I know that better than anyone. But we can make efforts to protect our kids in situations where the incidence of injury may be greater.

I have seen that first hand.

In fact, 2.4 million Americans sustain a brain injury each year according to The Brain Injury Association.

And in our DC metro area, workshops will be available for free this month and early next month on concussion awareness and injury prevention in youth sports:

We dedicated our high school yearbook to Dave that year. This is a page from my yearbook. 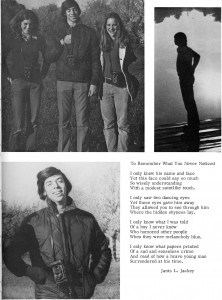