My daughter Hayley has been an off and on runner for a few years, but it was always difficult to convince Hayley that she could run more than two miles.

Recently however, I think on account of her POPS (me), she has not only been hitting but exceeding the four mile mark.

A few weeks back she forwarded an article from Outside magazine.

The article points out that Movement needs to be a lifestyle and that movement is Exercise. However, though movement is exercise you shouldn?t just move, you need a goal, and that is the difference between exercising and Training. And we need to be Training.

Training, according to the article, means structuring workouts toward an athletic goal, like a race or another organized event.

I thought about all this as related to my running this past winter and spring compared to the summer.

I have referred to Greg McKeown?s book Essentialism a few times before in this blog. McKeown discusses Olympic swimmer Michael Phelps and his success at the 2008 Beijing Olympics and points out that in Phelps? case winning was more than just an extension of his training, it was also a ?testament to the genius of the right routine.?

In his book, McKeown says that non essentialists think that you only get the essentials (training) done when they are forced, you have to labor to get make it happen, you have to push through it.

Essentialists, on the other hand, design a routine that makes training, though still physically difficult, more instinctive and the execution more effortless.

We all have goals.

We have financial goals, career goals, and goals at work that drive our daily activities and measure our short term success. And I have found, at least at work, routines help make those goals easier to manage.

As I started my running again last January I soon had a goal to work towards, a challenge from my buddy Jim to run the Reston 10 Miler in March. I set up a routine to make sure I was catching enough daylight 2 to 3 weekdays to get in shorter runs and did my longer runs on the weekends.

Once the Reston 10 Miler was completed I set a goal to run my first half marathon in the Long Branch Half Marathon at the end of April.

Once the half marathon was over, my training and my routine went to poo.

I let other things take over my schedule. Things like family, work, vacation, life in general. Not that those things aren?t important, they are extremely important but???my summer was out of control.

I lost my routine. I lost my desire to train.

I didn?t have another running goal to work towards.

When I did run it became forced, I rushed to finish often cutting runs short. Mentally, many times running was like a chore, something I was trying to squeeze in between seemingly countless other tasks.

I needed something, something that would make me establish a routine again. I needed another athletic goal to train for.

So I did just that.

I signed up for the Rehoboth Beach Seashore Half Marathon on December the 6th.

Now I have a goal and no excuses to start my training routine again.

As I was finishing writing this I asked Hayley if she had a goal that has motivated her to train and increase her mileage and she said:

?I want to be healthy and run races. And every time I go out to increase my mileage even a little bit, I do it so I can prove to myself that I can. ?

?But honestly,? she said, ?you have kinda motivated me to run and increase my mileage.?

HA! See! I told you it was on account of her POPS!

This Saturday I am running the DC Capital Striders Fall in Love 5K to benefit Special Love, a nonprofit foundation that provides cancer families a network of support, here is the link: http://www.dccapitalstriders.com/events/fallinlove5k/

Also one I had forgotten that I was running on Sunday, the 2014 Cherry Blossom Breast Cancer Foundation 5K at the Sanders Corner Elementary School, 43100 Ashburn Farm Parkway, Ashburn, VA. Race is at 1PM.

Also Potomac River Running has three races on Saturday and one on Sunday on their calendar. Here is the link: http://prracing.enmotive.com/

Thanks and have a great weekend! 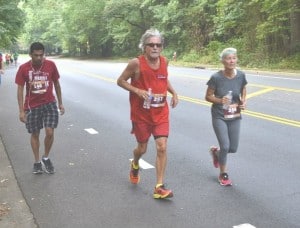 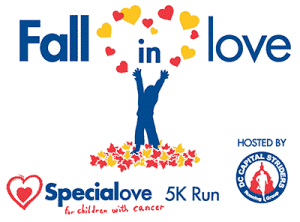