Symptoms of a Concussion 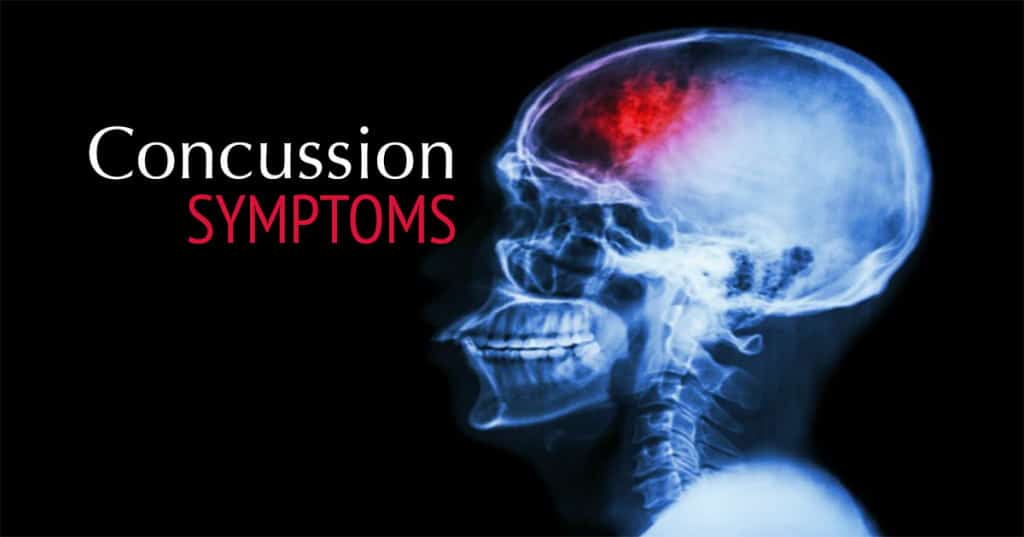 Mild traumatic brain injury, or a concussion, is defined as a short-lived loss of brain function due to head trauma that resolves spontaneously. With a concussion, function is interrupted but there is no structural damage to the brain.

The brain floats in a pool of fluid encased by the skull. These protections allow it to withstand many of the minor injuries that occur in day-to-day life. However, if there is sufficient force to cause the brain to bounce against the rigid bones of the skull, then there is potential for injury. It is the acceleration and deceleration of the brain against the inside of the skull that can cause the brain to be irritated and interrupt its function. The acceleration can come from a direct blow to the head or face, or from other body trauma that causes the head to shake such as a vehicle or sports related collision. Most concussions occur without the patient being knocked out while studies of football players find that the most of those affected were not aware that they had sustained a head injury.

All injuries to the brain are potentially serious and devastating. Attempts to decide what symptoms could define a concussion as mild or severe have not been able to define potential risk or guide the care provider and patient as to when the brain is fully healed. Concussions in sports are more easily studied than in the general public because of their frequency and the numerous studies on their evaluation and treatment. At present, it is reasonable to think of only one type of concussion, since the mechanism is to shake the brain. More importantly, it is important to recognize that there can be a broad spectrum of symptoms and severity for concussions and understand that most concussion symptoms will resolve themselves within a week or 10 days.

The signs and symptoms of concussion may be obvious or very subtle. As stated earlier most patients are unaware they have sustained a concussion and may not connect their symptoms with a head injury. This is especially true when symptoms develop hours after the initial injury and those events may have been forgotten. Being knocked out or having a seizure after a head injury are not common and may be very dramatic but these two symptoms do not predict the severity of the concussion. Symptoms like mild confusion, disorientation, and irritability are most commonly seen. Symptoms tend not to be objective and may be hard to describe or be appreciated by the patient. Often it is family members or friends who are more aware of the situation.

What is the treatment for concussion?
Anyone suspected of having a brain injury should be evaluated by a neurologist that is trained in concussion evaluation. After having been evaluated then time is the best treatment. Most symptoms resolve relatively quickly while medical treatment is directed at symptom control for headaches, nausea, dizziness, and insomnia. Brain rest is an important concept. In today’s high tech connected world, the brain is often asked to process information at a high rate of speed from television, computers, and smartphones. Limiting use of those devices may be helpful in allowing the brain to recover more quickly. Ultimately, the brain will recover at its own pace. While 80% to 90% of concussion patients will recover within 7 to 10 days, some patients will experience symptoms for weeks or months. The length of recovery is not necessarily related to the initial injury.

There should be a discussion with employers or school officials to alert them to issues of poor performance due to difficulty with concentration and comprehension. A return to sports depends upon complete resolution of concussion symptoms and this decision should come from the neurologist providing care. Remember to be patient either with yourself or the affected person. The brain is an organic computer and like any laptop or tablet if there?s an overload the system needs to reboot.